Few things are things as quintessentially New York as hardcore lyrical hip-hop. The MTA might be one of them. The New York subway has a distinct look and feel: one shot of those tiled pillars and that distinctive iconography, and you’ll know exactly what you’re looking at. Brooklyn rapper WHYYOUNGN shoots most of the video for “D A R L E N E” in a subway station, and he’s done that for a reason. He’s aligning himself with the city at its most elemental — its sinews, veins, and fundamental rhythms. He’s a representative of the city, and he’s making sure you know.

He’s also vigorously waving the flag for his borough. In “D A R L E N E,” he shouts out the Grand Army Plaza: a transportation nexus, the beating heart of Brooklyn, and the buckle that cinches the rougher neighborhoods south of Prospect Park to the wealthier enclaves to the north. WHYYOUNGN straddles all of those divides, and every time he rhymes, he reminds listeners of the fundamental unity of New York hip-hop and the long and storied tradition of the genre. “D A R L E N E” is a minute and forty seconds of tight, relentless, irresistible rhyme, matched to a spare but hard-hitting beat. Like a subway train, it rumbles by with force, authority, and no small amount of menace — and it’s gone before you know it, so catch it if you can.

“D A R L E N E” comes right on the heels of the incendiary “Hip-Hop Booty,” a summer single that earned WHYYOUNGN plenty of airplay on BET Jams, respect from his peers and the music press, and the deep appreciation of a New York rap audience that demands the best from emcees. The “Hip-Hop Booty” video caught WHYYOUNGN in action on the pavement outside the Barclays Center, comfortable and commanding, looking as much a part of the streetscape as the bodegas and traffic lights. For the new clip, he’s descended into the tunnels beneath the Grand Army Plaza, and he’s rapping under the fluorescent lights of one of Brooklyn’s most storied stations. He gives us the silver turnstiles, the black iron grates, the wooden seats, the MetroCard booths, the wall art, and the transit police hovering on the streets above the station. In one memorable shot, he stands in front of the subway map as if he’s part of it – as if he’s a piece of the city’s geography and history. And as a living link to the ongoing story of hip-hop in New York, that’s exactly what he is.

What has your musical journey been like? What was the support system like for you?
The musical journey hasn’t been easy. Especially being from N, with so many doing the same things it made it harder to seek opportunities. Some of my friends would support my shows which showed me a lot of what I had to offer.

What role has hip-hop had in your life?
Hip-hop gave me an outlet, it was therapeutic for me to express my thoughts in unique ways. Hip-hop made me stronger mentally and made me more of a man today, it’s life to me. I wouldn’t know myself without hip-hop.

What message do you hope listeners will take away from your music?
Honestly, I hope my fans take away every message I deliver. I pride myself on having a purpose behind my music. I don’t think I’d still be doing music if I didn’t find my message or voice. I hope fans take the purity in my message along with the misunderstood questions we all ask ourselves: WHYYOUNGN IS NOT
PERFECT AND IT’S OK NOT TO BE PERFECT, BUT  TO STILL BE GREAT IS MY MESSAGE.

What keeps you motivated to keep chasing your dreams?
Sometime I ask myself that same question and I guess to sum that up for you, it’s every aspect of life that inspires me. I don’t know where it comes from, I just have these visions that I see and feel, almost like I can touch it. The feeling is so strong I’ll just find a beat and write, it’s seeing the vision that helps me stay
motivated.

What major projects/plans do you have that fans can anticipate?
The album Shampoo coming out this Spring or Summer – I look forward to that, it’s one of my best projects yet. A lot of great production great content just a brand new style from me to be looking out for. My first EP First Ten Minutes was a small snippet of what’s next to come.

Thu Mar 10 , 2022
Talent is one thing. A knack for finding opportunities is another. DJ Bruno Maciel has both of these. However, the rising talent in Brazilian e-music had a different problem as 2021 drew to a close. A memorable name. That’s not to say his name was not known or suitable, but […] 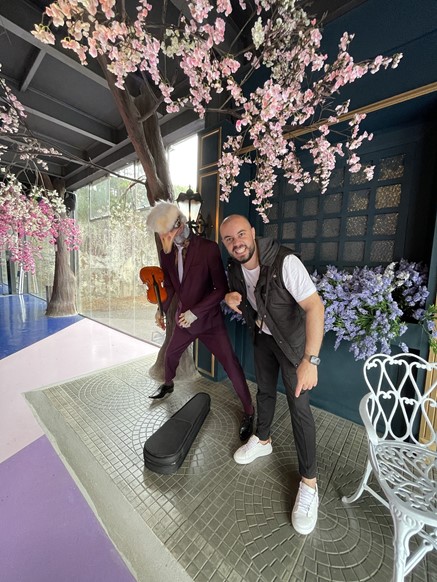