2021 “Best Rap Album” Grammy-Award nominee Freddie Gibbs releases “Big Boss Rabbit,” a surprise single that finds him taunting the opposition and flexing the fruits of his labor after his busy awards season. Accompanied by a JMP directed video, “Big Boss Rabbit” is Gibbs’ third single and a taste of what’s to come since partnering with Warner Records in 2020.

“Big Boss Rabbit” opens with a Mike Tyson sample that encapsulates Gibbs’ current frame of mind: “I’m the best in the world. It’s facts.” From there, Gibbs floats over cinematic strings and banging trap drums like a heavyweight champ. He bounces in and out of breakneck double-time flow, rapping about carrying cash in designer luggage and celebrating his many victories. Every punchline is an absolute haymaker. On the hook, Gibbs reminds you that he’s always ready both for war, and the cover of men’s fashion magazines: “Three MAC-11’s, back of the 7 on some boss shit / I put that president on my wrist, and I got frostbit.”

“Big Boss Rabbit” is a nod back to the video for Gibbs’ “Gang Signs,” his smooth February single with TDE’s ScHoolboy Q. Onscreen, Gibbs is an animated gangster rabbit riding around in the real world. Chain around his neck and gun on the dash, he gets his money and ducks the pigs (literally). This new single continues an especially productive streak for Gibbs. In October 2020, he debuted on Warner Records with Big Sean collaboration “4 Thangs,” which followed the May release of his Grammy-nominated collaboration with The Alchemist, Alfredo. But as “Big Boss Rabbit” confirms, being the best means rarely taking days off.

Check out the “Big Boss Rabbit” official above and stream the single below.

Fri Apr 2 , 2021
Nick Cannon and award-winning gospel artist, actress, and entrepreneur Kierra “Kiki” Sheard debuted a new song “No Weapon” in honor of Good Friday and Easter weekend. A cover of Fred Hammond’s “No Weapon Formed Against Me Shall Prosper,” Cannon and Kierra’s rendition of “No Weapon” appears in his upcoming feature […] 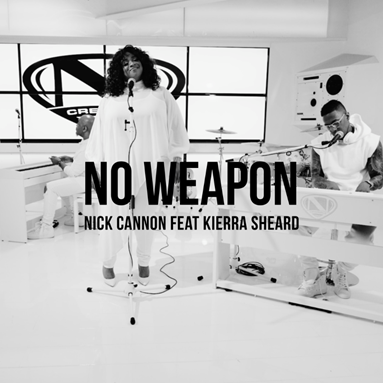