Deryck Rimson, better known as stage name, “D.Rim” is a American record producer. He was originally born and raised in Detroit, Michigan as a kid and also is from his 2nd hometown of the inland empire of Southern California. He is also a college graduate from Berklee college of music as a online business and performance major student. D.Rim’s sound choices and coast to coast vibes is something that the world is looking for. With Inspiration from the west and east coast pioneers of DJ Quik, J Dilla, DJ battlecat, Warren G and Dr.Dre, D.Rim is on the path of continuing the feel good legacy of feel good Hip Hop and R&B Music. D.Rim has also scored Music for tv shows such as “fifth ward” on UMC network starring Mya Harrison, and has production work recently charted out on the UK independent charts in 2018 for his work with recording artist and his mother, Terrie Rimson off of the “Threads Of Love” album.

HHW: First, we need you to introduce yourself to the readers who may not be familiar. Tell us a little about you.

Deryck: My name is Deryck Rimson also known as D.Rim. a musician born and raised out of Detroit Michigan way by Southern California. I recently graduated from Berklee College Of Music and is currently a full time producer and DJ in the city of Las Vegas, Nevada.

HHW: When did you first fall in love with music, and how long have you been actively pursuing your dreams of becoming a music artist?

Deryck: I fell in love with music at the age of three years old when I started becoming attracted to the drum set. Ever since then, I started having a love for gospel albums growing up because I always admired the drummers that played on those records and from then I started loving R&B and then hip hop after that.

HHW: What differentiates you from other artists?

Deryck: I believe in originality I do things that most artists are afraid to do and thats be themselves. Most people say my sound isn’t current and it needs to be updated at times but I usually go with my inspiration of the G-Funk era or Dilla era of Bounce Effect influence that I was brought up on. I tend to learn from today’s era but I make sure I stick with what made me fall in love with music in the first place.

HHW: Are there any artists in the present day or before you that musically inspire you? If so, who and why?

Deryck:  Growing up I was into gospel and R&B so I will say the first albums that caught my ear consistently was Karen Clark Sheard who is like a aunt to me from the clark sisters, Kim Burrell and then I started getting into Brandy, and Faith Evans. When I got older around 8, people that went to my dad’s church at the time were getting me into Musiq Soulchild, Pharrell and the soulquarians movement the featured a lot of J Dilla to D’angelo and Common which got me into Hip Hop and when I moved to the west coast, DJ quik, warren G and Battlecat became big influences in my career. Now I get inspired by everything currently. As a DJ I learn a lot when I listen and play records at clubs and at the skating rinks including hip hop artists that are out today.

HHW: What motivates you in and out of the booth?

Deryck: I’m a Producer and a DJ so just like most artists, Life in general inspires me. Sometimes listening to music or my favorite record that I used to love will put me in that space to want to relive that moment in time and create that same vibe. Being at the skating rink when I DJ sometimes brings back that feeling of wanting to create something that people can have a good time to which inspires me mostly especially when I see a lot of women skaters on the skate floor and at club events.

HHW: What are three things about you that would shock the public?

Deryck: I mainly work on full projects using two controllers. A beat machine and a 49 axiom keyboard. Some people think I have a lot of equipment but I don’t. The 2nd thing away from music is that I have a viral video of me playing Michael Jordan one on one that has shocked me that I actually got that chance to play him and I was also wearing a Kobe Bryant jersey while doing that. And third, I sometimes stuttered when I talked but when I talk on social media I don’t stutter at all.

HHW: What do you feel you contribute to the culture as an artist?

Deryck: Authenticity is something I contribute to the culture. I know it sounds cliche but its something that has been lacking in music no matter what genre. Being yourself is a lost art and I try my best to make that a dominant factor when I create anything. Even if it sounds current it has to have a D.Rim signature somewhere within the record.

HHW: How do you balance your career with your home life? Family?

Deryck:  It has been challenging. Its not easy. I just graduated from college just a couple months ago and being almost 30, I had to learn how to write things down and schedule my days. when I write stuff down and do what the late great Kobe Bryant has taught us and that is to “Start early”, my day usually is balanced which is good for my mental health as well.

HHW: What’s next for you? What should we be on the lookout for?

Deryck: My new album “28 : Better Late Than Never” is on Pre-Order right now and is set to be released September 17th on all streaming and digital platforms and also dropping a jazz instrumental album as well and new singles. Plus I have a podcast coming out soon called “Vision over Sense” that I’m working on as well so stay tuned for more, I can’t wait.

HHW: How can those looking to book you make contact?

Tue Aug 10 , 2021
By Kim Coco The ROLLING LOUD 2021 Music Festival, returned on July 23 and it came back with BANG! The 3 Music Festival that was held at Miami Garden’s Hard Rock Stadium saw over 75,000 ticket holders throughout the weekend ready to kick off The Hip Hop Show. In Rolling […] 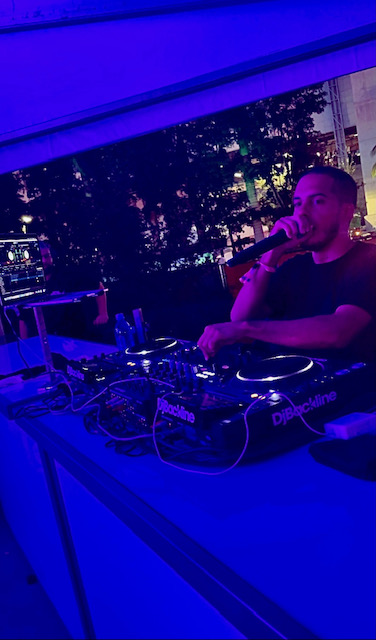