“Where words fail, music speaks.” This sensible quote from Hans Christian Andersen is embodied by up-and-coming R&B/afrobeat star Gbeke. Through years of devotion to the creative writing process — whether poetry, songs, or journaling in general — she has learned to reflect on personal and universal experiences to channel raw emotions in her refined musical projects. She prides herself in putting pen to paper, turning negatives into positives with each beautiful piece of art. Being a performer since the fourth grade, Gbeke exudes confidence that is immediately inspiring to all who find her and her talent. She has fully embraced her Nigerian background and Arizona upbringing in her sound and has truly taken form as a full-fledged artist throughout her life journey thus far. Releasing exquisite singles and EPs since 2017, she got the opportunity of a lifetime in 2021, performing at the Made in America music festival, as did other major industry players such as Roddy Rich and Megan Thee Stallion in years prior. Now, Gbeke is giving new and returning fans “Top Priority,” an uplifting self-love anthem that might be her most organic, authentic, and unapologetic Gbeke production yet.

Gbeke wrote “Top Priority” after her boyfriend cheated on her with his ex. It was the day before Valentine’s Day and just two days after her birthday. She recalled this song being the one that took her the longest to write, taking months to process what happened, gain confidence to value herself more, and find the right words to accurately and effectively capture her feelings and revelations before, during, and after. Her ability to project such internal growth is extraordinary. Within the first verse, she forthrightly expresses this by saying how she is a work in progress and a masterpiece at the same time. The captivating Afrobeat backing track has a groove that can physically and spiritually move you while the R&B vibes provide a calming effect. The motivational message — to treat yourself as a priority, to see and know your self-worth, to look within and be yourself — is one that more people need to hear. Whether they show it or not, everyone has those days they feel they are not good enough, but “Top Priority” serves as an artistic reminder that you are more than enough and are of the utmost importance.

Visually, the “Top Priority” music video makes it clear that Gbeke’s music does more than just create a story. It tells her story in a way that connects with and encourages others who can relate to her complex emotions and life occurrences. The focus of the entire video is on Gbeke, as the song’s theme reinforces it should be. She lyrically paints this vivid picture of what loving yourself and putting yourself first should look like, and by performing “Top Priority,” she shows her capacity to actually believe it with the hopes of motivating others to aspire to do the same.

What does your creative process look like? How do you ignite your creative sparks and channel your life experiences and perspectives into your songwriting?

My creative process is sporadic. I typically have thoughts that transform into feelings, and I’ll listen to a few instrumentals and write from there. I’ll be at the gym, driving, grocery shopping, or even meditating when an idea for a song comes to me. I try to stay in tune with my emotions, and I keep a folder in my notes for little ideas that float through my brain during these instances, and I’ll later include those in my lyrics. I desire a lot of alone time throughout this process as I dig deep into how I am feeling, or try to paint a picture of my perspective of life in song form. Songwriting helps me channel the words I can’t speak into the verses I can sing.

Growing up writing poetry and continuing to journal today, how did you turn your raw writing into songs and pieces of musical art? How does that continue to shape your songwriting today?

Growing up, writing was my freedom of expression. Initially, it wasn’t about art or creativity; it was a way for me to understand my thoughts and perception of the world- I wrote about what I thought, saw, or felt. When I was 11, I wrote a poem about the Haiti Earthquake of 2010 because of how deeply I felt for all of the people who were impacted. Coincidentally, I heard the song “We Are the World” not too long after, and I was inspired to use my poem as a basis for my first song. I realized how easy it was to take a spiral of thoughts, or ‘word vomit,’ as Cady from Mean Girls would call it, and shape it into another beautiful form of art. This has continued to be the basis of how I write my music, but instead of writing full stanzas of poetry, sometimes I’ll just jot down what I’m feeling and go from there.

Considering you began singing and performing quite early in your life, how have you noticed that experience shaping your stage/camera presence now? How have you noticed yourself progressing and improving as a full-fledged artist over the years?

I was the kid that was never fazed by anything; I was free-spirited, energetic, and extroverted. I could perform at the drop of a hat, choreographing my own moves, and singing to the beat of my own drum. I participated in cheerleading, gymnastics, and dance, which is what initially shaped my confident stage presence, but as I grew older and went through puberty, I began getting self-conscious. It was like my body forgot how to move after a certain point, and I stopped cheering and dancing. Instead of worrying about having fun, I was worried about what people thought about me. In seventh grade, I used to sing for crowds of people at school with my back turned because I had grown so anxious of my craft and not being good enough. Though I was in the school choir and could outsing anyone at school, there were negative thoughts that stuck with me for years. During high school, I grew confident in my craft again, and it led me to various performances and my first studio recording. In college, although I still battled with anxiety and self-consciousness, I decided to put that into my music and record my very first EP, Division. Being the full-fledged artist that I am today has not come easily, but the journey has been integral in my growth. Over the past decade-and-change that I have been performing, incorporating the highs of confidence and the lows of self-esteem into my craft has helped encourage not only myself but others as well.

What inspired “Top Priority”? How does the message connect personally to you, and what is the ultimate message audiences should take from the song?

Though I am not 25 yet, I feel like I have lived the life of a fifty year old. I have been through so much good, and so much bad as well. I noticed that although I was progressing in my music career, I was writing mostly love songs, or really sad and depressing music about mental health and sexual assault. I didn’t feel like I was writing about ‘Gbeke,’ but about her feelings. The idea for “Top Priority” came to me after I decided that enough was enough. Enough disrespect from men. Enough coming second. Enough putting myself down. Enough shame. Enough accepting what I don’t deserve. The actual incident that prompted these epiphanies isn’t as important as the self-love that came afterwards. I was sick of being hurt and feeling like I could only express it through music. I was tired of feeling like an overly emotional robot, pretending that I was okay. I wanted to feel seen, heard. I wanted to create something that screamed confidence. Sexiness. Self-love. Healing. GROWTH. And I think I captured that pretty well in the single. The message that I want everyone to take from it is that being a masterpiece and trying to master peace can exist synonymously. I used to think that I was broken and had to be healed completely to be loved. But I realize now that in all of the trauma I have endured, I have grown to love myself more and more through accepting the past and choosing to move forward from it, instead of letting it hinder me, and that sometimes, it’s okay not to be okay.

What was your experience shooting the “Top Priority” music video? What is going on visually, and how does this approach help in best conveying the lyrics?

When I shot the video for “Top Priority,” it all flowed naturally. The song is, in essence, a letter to myself. It’s the amalgamation of everything I have been through and overcome – somehow possessing self-love and finally knowing my worth. As I sang in each different location, changed outfits and hairstyles, I intentionally listened and began grooving to my own lyrics because they were affirmations of positive change. The director came up with the idea of having me and my boyfriend in the video arguing, and focusing on the story of the aftermath. In the first scene, I am writing in my journal, and I am frustrated because of how I am feeling. Writing down my feelings makes it real, and I’m wishing internally that this was all a bad dream. But then, after being down for a little while, I start to realize who I really am. I get up. No matter what pain I deal with in the video – arguing with my boyfriend, him leaving me after I beg him to stay, me crying and feeling alone, I. Get. Back. Up. Each scene of the video tells a different part of my grieving story. Anger. Denial. Bargaining. Depression. And finally, acceptance of my story and myself, which is beautifully displayed in the last scene of me holding a rose, which is what I am – a delicate flower.

How does “Top Priority” fit in with your upcoming EP, Love Gbeke? What is the EP’s overarching purpose/theme?

Being a people pleaser was ingrained in my psyche from a young age. As a child of two Nigerian immigrants, although I lived the American dream, I was never shy to the traditional Yoruba culture. I was taught to be respectful to my elders, and do whatever was asked of me; these behaviors stuck with me well into teenage and adulthood, and I found it difficult to say no. I began considering people’s opinions of me rather than my own self perception, and I never felt a sense of satisfaction unless I impressed people. Coming to terms with this character flaw was the beginning of healing for me, and I decided to write about it. Love Gbeke is about my search for love and acceptance in others, and finally finding it in myself. “Top Priority” ties in perfectly with it because instead of putting other people’s needs and expectations above my own, I now realize that I come first. After all, I can’t and won’t pour from an empty cup.

Young Moe Proves He's a 'Real One' On His New Mixtape

Mon Sep 26 , 2022
Since he was 14, Young Moe (@YoungMoe_Life) has used his unique life experiences to inspire his lyrical artistry. Many years later, the battle-tested recording artist delivers his 13th tape. The Alexandria, Virginia-bred MC speaks from his soul on every track. His newest mixtape, Real One, comes on the heels of his impressive run of […] 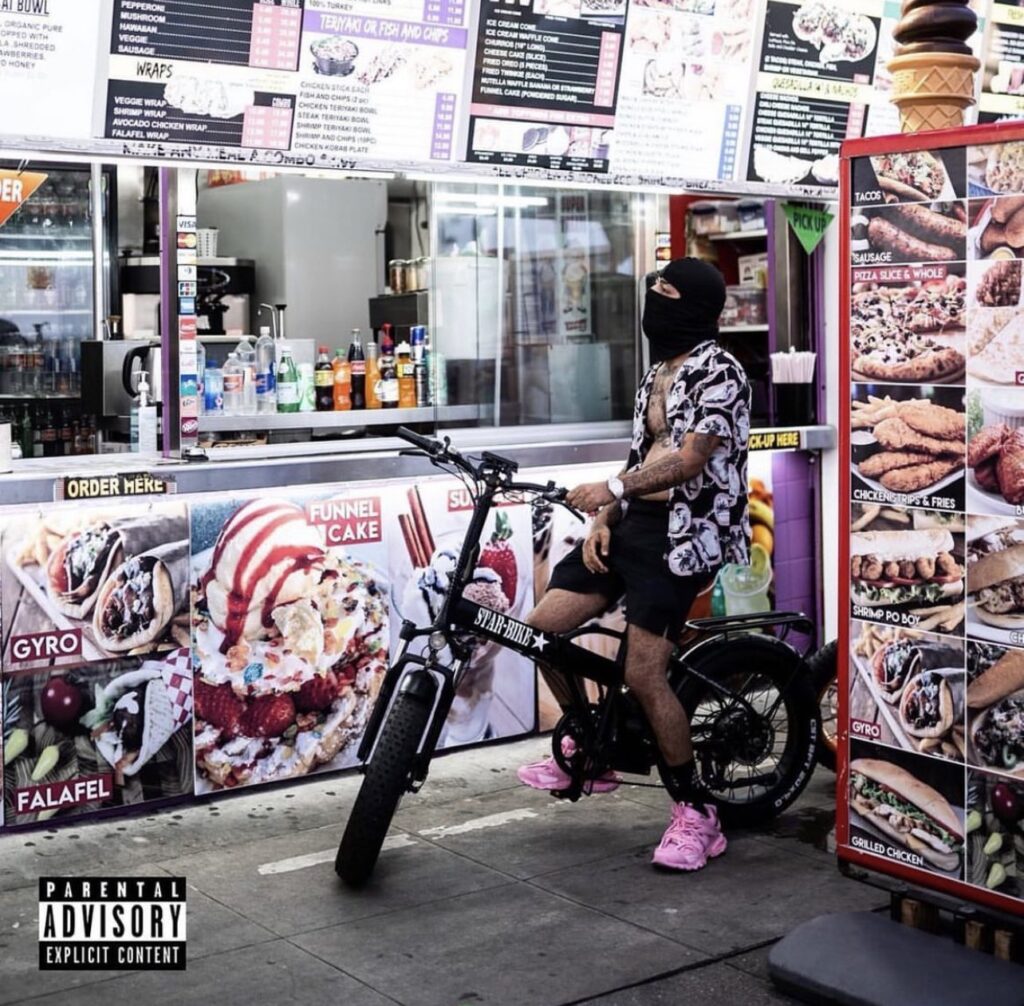