Hailing out of NYC, Chinese-Guyanese socialite, brand ambassador and rapper Chinese Kitty is shaking up the music industry with her debut album “SMD”. If you’re a member of her beloved Kitty Gang on IG or watched her on Love & Hip Hop Miami, you would know that Chinese Kitty does and says what she wants and she definitely keeps that same energy for her new album. The 13 track project has everything from club tracks to boss b*tch street anthems and doesn’t disappoint. “SMD” was released under her Label Kitty Gang Music which recently signed to Empire.

Our host Radio ReddRoxx sat down with Chinese Kitty on Instagram Live to talk about “SMD”, other projects she’s currently working on, the future of Kitty Gang Music and she even spoke briefly on whether or not she would return to Love & Hip Hop in the future. 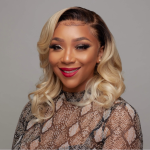 AQ Heats The City Up In New Visual For "TOP 10," featuring L.A. Higgz.

Fri Jul 2 , 2021
Aqeel Quinn, better known by his stage name AQ, is a Los Angeles native who just released a new single and visual for “TOP 10,” a bonafide party anthem. The song channels the LA party scene and nightlife that Los Angeles is famous for as AQ, L.A. Higgz, and producer […]