YG is in hot water after being called out for shooting a music video during a protest in Hollywood this past Sunday.

YG teamed up with Black Lives Matter co-founder Patrisse Cullors and gathered over 50,000 people who filled the streets to peacefully protest the killings of unarmed blacks at the hands of police following the murders of George Floyd, Ahmaud Arbery and Breonna Taylor.

During the protest, the Compton MC shot a music video for his latest protest anthem “FTP (F**k the Police).” While YG performed the song, fans held up protest signs. However, this did not go over well with many who believed that he was attempting to compensate from the protests.

Rapper Chika, who was at the Hollywood rally, was one of the more popular names to call the rapped out for the video, tweeting “shooting a music video while breonna taylor’s killers are still walking the streets is fucking disgusting.” She then took her issues over to Instagram, posting a video further laying out her issue with the way YG conducted himself.

“Why the fuck are you shooting a music video, you selfish ni**a? I’m mad because you’re out here using people’s names. People are chanting these names because they’ve passed, and you’re over here doing it for a music video. I ain’t seen you at one of these protests. You’re capitalizing off of people being fucking tired. I showed up fucking tired because I give a fuck about these people who’ve died and making sure no one else dies–that’s why we’re out here. You’re capitalizing on the fact that people are willing to put their bodies on the front lines for your stupid ass music video. No one even listens to you outside of California.”

The criticism quickly made its way to YG who addressed the backlash while sharing an aerial shot of the crowd that he helped to assemble on Hollywood Blvd.

“For anyone out there talking I don’t question your advocacy and don’t think you should question mine. See you gotta understand that a lot of people out there they see me as a N*gga. They don’t see the black proud man. They see a kid from Bompton and they expect violence. They hear FTP and they think I’m gonna come and burn my city. So we showed up and did it right. We proved them wrong.”

The 30-year-old rapper also urged the critics to focus on the mission at hand and not so much on his video.

“The real story here is me and Black Lives Matter brought out 50,000 people today to peacefully protest and unite for change. I wanted to document that so when they hear this song and think we are reckless and violent they see a peaceful protest of all different people coming together for a common cause. That is history. That is breaking down these stereotypes on our people and our neighborhoods.”

He went on to add, “All of us protesting are on the same side here..instead of questioning each other’s activism we should be directing that energy at the cops and the government and helping to create the change we want to see. Stay focused and stop that social media judgement without knowing facts and hurting a cause we all a part of. We got a real enemy and it ain’t each other. On my momma!”

Whether it was distasteful or not, the protest had a great turn out.

Tue Jun 9 , 2020
Lil Wayne has unveiled the fun visual to one of the stand out cuts from his Funeral album. The “I Don’t Sleep” clip features an animated Weezy skateboarding in a trippy fantasy land before being joined by Takeoff who is seen in various colorful scenes.  Days ago, Weezy dropped the […] 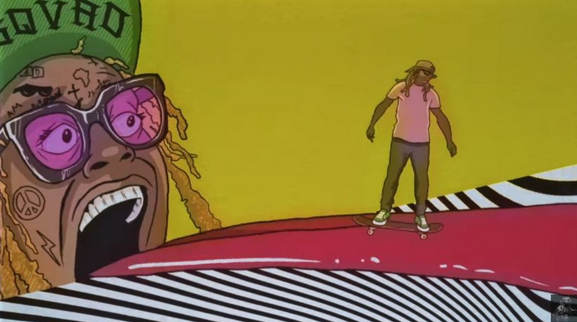