Hip-hop belongs to the world. No form of music shakes the globe any harder. But hip-hop is also hyper-regional. If you’re an emcee, no matter how wide your vision is, you’re still expected to put on and represent your block, your community, and your neighborhood. That’s something that B. West understands instinctively. Like all great emcees, his ambitions are as big as the planet. He’s got music that’s catchy and swaggering enough to connect with hip-hop fans in all nations. But when those hip-hop fans listen to his verses, what they’ll find are specific, poetic, lovingly crafted descriptions of the joys and hardships of his upbringing in Philadelphia, Pennsylvania — a city that has always been central to the larger story of hip-hop.

“The Narrative,” his street-shaking new single, is nothing short of B. West’s life story, rendered in rhyme and delivered with the conviction and good humor that the rapper has become locally famous for. Since it’s an autobiography, you can expect plenty of Philly content. West raps about his youth in the raw but beautiful neighborhoods on the north side of town, reminisces about childhood games and adolescent pastimes, and lets us know exactly how a grown-up Philadelphian spends his days. Like all accurate reporters must, the emcee names names, dropping the handles of eateries, shopping centers, and the skating rink where he and his friends hung out. Every bar of the song radiates love and pride, and B. West has mixed it with an emphasis on clarity, just to make sure you’re present to every syllable. No matter how far he’s traveled, and no matter where he’ll go next, there’s a part of his heart that will always belong to the City of Brotherly Love.

His hometown loves him right back. Memorably, B. West has appeared on “Good Day Philadelphia,” and he’s hosted local luminaries of his own on his web-based talk show — including Meek Mill. There’s footage of B. West with Meek Mill and fellow guest Jadakiss in the clip for “The Narrative,” which, in keeping with the song’s theme, foregrounds Philly in all its grit and glory. We’re taken high above the skyscrapers of Center City and the bridges across the Delaware River, taken into the graffiti-adorned hip-hop tabernacles under the freeways, and escorted along the sidewalks of Broad Street, right in the shadow of City Hall. We’re in the presence of the best kind of tour guide: one who knows his town down to the smallest detail and who approaches each intersection with reverence and affection.

Tell us about your rap journey, what sparked your interest?

My rap journey started in 1998 when I was in elementary school writing poems. I played around with different rhyme patterns and flows and one day I decided to put my words to a beat, and the rest is history. I started recording my songs and freestyles on a stereo cassette player and we would play the beat out loud on another stereo and just record on cassette tapes. There was no punching in or Addlibs unless one of ya homies knew ya lyrics lol. The good ol days of just having fun with ya friends. Then I saw a recording studio program and quickly learned to record and mix vocals. Once I got better with recording I eventually ventured out to open mic events and recording my performances with my camera. One of the first open mic’s I went to was on South Street in Philly and Larry Larr was the host, he gave me a chance when I was 18 because it was a 21+ club. After that first time I kept coming back every week with new music making myself known a little more and networking with different artists trying to make things pop! While dealing with my music I was sharpening my camera skills and filming music videos and blogs for myself and others including Spantaneeus Xtasty, Tone Trump, Elliot Ness, Freeway, Jadakiss, Shay Star and the list goes on. My YouTube channel definitely shows my music journey in detail for sure, feel free to check out ALL my videos www.YouTube.com/BWestMusic .  My journey continues with me selling my music worldwide on all major online stores and platforms as well as having my own B. West app for a few years for both iPhone and androids. I have always tried to be 1 step ahead of others because I always did my homework and stayed focused on the business side of music as well as the fun side of creating the music. I started a blog series that followed me around when I did performances or music videos shoots etc on my website www.MrWestTv.com be sure to check the series out as well as ALL my music videos and more. My journey still continues today, I just had to adjust a few things and adapt to some other things but I am still going strong and doing what I love.

How has Philly helped to shape your sound?

Philly has definitely inspired me to want more out of life and inspired me to do more with everything I involve myself in as well as give more than 100% with everything I do. Being from Philly will definitely keep you sharp and on your toes rather you play basketball, rap, sing, or whatever. Philly is a show up and show out town, if you saying you the best then you will get challenged to see if you are the best for sure so be sure that you are ready. I never wanted to sound like a Philly artists as some critics would put it, I always wanted to sound like me! I always wanted to stand out from the rest, so if your doing that then I want to be doing this, that was always my flow and how I did things. I never wanted to be categorized as a Philly rapper because I’m so much more than just another Philly rapper. Get to know me Thru my music and sound and you will see I’m more than just a rapper.

How did you formulate your own unique style and flow?

I created my own style because I wanted to stand out from the crowd and be heard, I wanted to turn heads when I started rapping because nobody ever heard anything like what I was saying. When I was young I didn’t wanna spend money at these expensive studios so I learned how to make beats using fruity loops and then I would record songs to my own beats on Thru Cakewalk Studio program. And then I would film my own music videos myself so having that much determination and skill can help you make your own style and flow because I’m so focused on what I’m doing and what I’m trying to create that I’m not focusing on what the next artist is doing or saying because I’m focused! It doesn’t matter what the other artists are saying or talking about, I’m telling my stories and shining light on my lifestyle and situations so of course my music will sound different because it’s genuine and I’m not just rapping to you telling you what you wanna hear or trying to sound like what’s popular at the moment, that’s not me. I can only be me and that’s the vibe and sound you get to enjoy when listening to my music. With that being said I appreciate all my fans for rocking with me worldwide, just know I appreciate all of y’all I really do! Thank You.

Tell us the songwriting process behind “The Narrative”, what is your typical approach to creating music?

The Narrative is a completely different project from what I’m used to recording. I didn’t even plan on recording a whole project but the way it worked out was dope. My long time friend G Dash started making beats and he told me he wanted to produce a whole album for me and he was serious, so after he sent a few beats my way The Narrative was the first song I recorded for the project and that just set the tone for the album, it was so realistic and relatable and inspiring that I just wanted to keep that energy with the whole album. So Big Shout Out To G Dash for the idea and motivation to create this song and project. Be sure to follow G Dash on IG @Dash_215 especially if you looking for dope beats. Tell him B. West sent you !

What are some memorable moments that is depicted in the video for “The Narrative”?

Some memorable moments in the Narrative video for me is when Mike Jerrick from Fox News announced one of my songs on Good Day Philadelphia and played a snippet of the music video, that was dope! I even got a call from Sandman (from the Re-Up Gang) and he told me how dope it was to see up and coming rap artists being played on the news in a positive way and not the usual negativity way, so that was dope. Another memorable moment is when I was on the movie set of “Must Be The Music” directed by Charles Dutton, filmed in Philly I was casted as a extra in the movie which was fun and I got to meet Black Thought from The Roots, Trina, Meek Mill, and one of my favorite rappers Jadakiss. I was able to get some camera time with Jadakiss for my Mr West Show Blog so that was definitely a dope experience for me. Another Moment that’s memorable is when I was up in New York City with Tone Trump doing The Round Table Show and I got to meet Charlie Mack, Jahlil Beats & Meek Mill because they were also featured on the show that night so that was cool for me because I was always networking and meeting new people that could help open doors for me in the future. The end of the video will always be memorable for me because I got married and settled down. I wanted to show that no matter where I came from or what I been Thru rather it be good or bad I always have a positive mentality and I’m always looking forward to moving forward and staying positive in life. Your mindset of today can depict your outcome for tomorrow, it’s not about where you started in life, it’s about where your going in life always remember that. I Thank You All For The Interview & I Thank You All For Taking Time Out To Read It & Getting To Know Me A Little Me. I Appreciate The Love And Support. Thank You. Be Sure To Visit My Website. www.MrWestTv.com 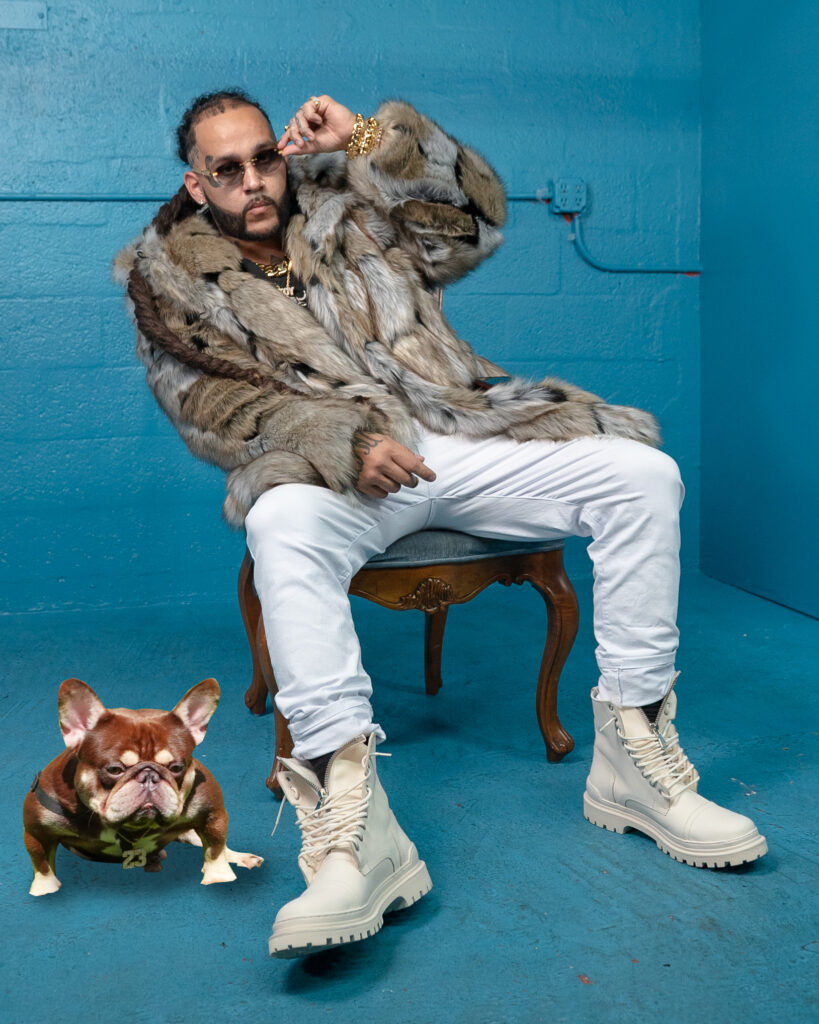